Leader of the Blue 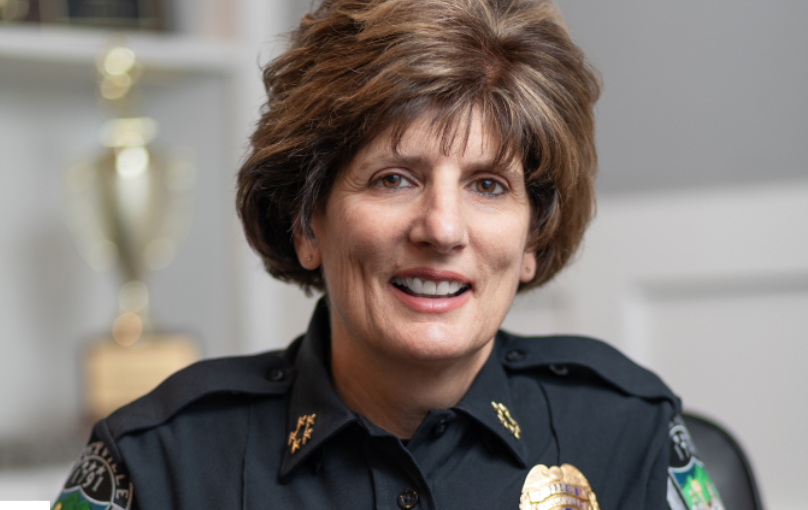 Eve Thomas  When charting the rise of Knoxville’s Chief of Police, Eve Thomas, there’s a clear trail of hard work, building block by block as she earned the respect and trust of her colleagues. However, her life could have quite easily gone in another direction. Rather than running straight to the doors of the police academy, she instead applied on a whim at the urging of her brother. While her brother’s career in law enforcement never came to fruition, Chief Thomas quickly saw opportunity.

“I had a bachelor’s degree in psychology from UT,” she says. “And it really rolled along with my degree—helping people and being able to work out in the community. I really enjoyed that.” It didn’t take long for that passion to be noticed by her superiors. Starting as a patrol officer, she then moved into recruitment, an area that she still focuses on. “Of course, you have to have the heart for it,” she explains. From there, she worked with the Accreditation Unit, responsible for keeping the department compliant with the Commission on Accreditation for Law Enforcement Agencies. After commanding her own squad with a promotion to sergeant in 1999, she eventually reached the rank of lieutenant in 2005.

“At that point, you get to assist the department and community by affecting policy and procedure,” she says. “I actually got to work in our downtown, riding a bike … with people, and being on Market Square. That’s the truest form of community policing.”

Most recently, in June of 2018, Chief Thomas was appointed to her current position by then-mayor, Madeline Rogero. It was a historical moment as she is the first woman in the department to reach such heights. Chief Thomas seems to take the appointment in stride. Having risen through the ranks working side by side with her fellow officers, there is a mutual respect built over decades. “Everyone knew what to expect from me because they knew what I expected from them,” she explains. “Hopefully, they realize that I want what’s in their best interest and the community’s best interest as well.”

As she continues to serve, Chief Thomas stresses the importance of staying tuned in to not only her officers, but the community as well. “It’s partnerships and problem solving,” she says. “And if we don’t have those partnerships, we can’t solve our problems together.”