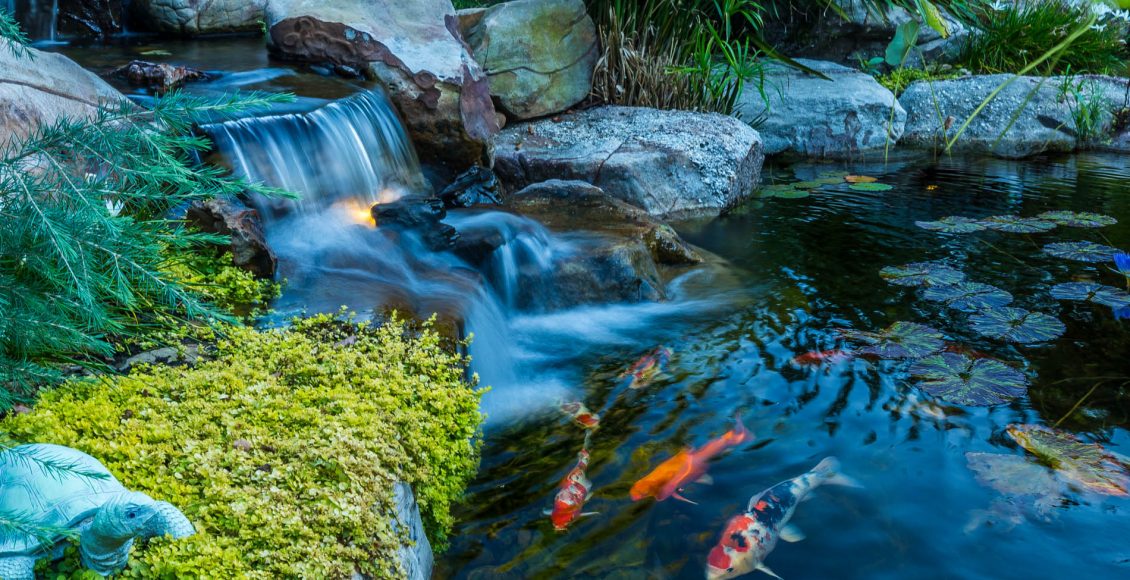 His palette consists of browns and golds, aquas and blues, grays from charcoal to ash, and every shade of green. His medium is what the Earth provides: rocks, water, plants, trees, fish, frogs, and turtles. His canvas ranges from a backyard garden to an outdoor mall to the flamingo exhibit at Chicago’s Lincoln Park Zoo. His passion? Building people the spaces they love the best.

A native Michigander, John Adams grew up on the lakes there and developed a love for fish and aquariums. His first job after moving to Knoxville was at an aquarium store in West Knoxville. He started his own landscaping company in 1994.

Little could Adams imagine the path before him when he built his first water feature in his mom’s front yard. “She lived on the lake in Louisville, and I noticed a beautiful rock formation in the yard. So I started hand-digging out between the stones, and I made my first waterfall. It was the hardest thing I’ve ever built,” he recalls, “but I was hooked. That was it for me.”

Serendipitously, after creating that waterfall, Adams received a catalog in the mail from Aquascape, a major supplier of pond products in Chicago. The company offered guidance for building a successful water feature business. He attended one of its seminars in Nashville in 2000 and got to know the team, including owner and CEO Greg Wittstock. He worked with them on several projects, including a native fish habitat at the Shedd Aquarium and that flamingo exhibit at the Lincoln Park Zoo. “The flamingo pond was about 80 years old, and we built a natural ecosystem filter, with waterfalls, to help improve the circulation and filtration in the pond, so it could digest its own organic matter,” he says. “That was very rewarding—and one of the nastiest projects I’ve ever been on, too. I threw my boots in the garbage after that.”

The opportunities to learn from the Aquascape team often came without pay. “I’d see an opportunity and chase it,” he says. “For at least five years, I’d just go—sometimes I paid to be a part of a project with amazing artists. We’ve built rainwater systems in Africa. We built a spider monkey habitat in Gulf Shores and a water feature for Peter Pritchard, who’s a leading authority on turtles and tortoises. We built waterfalls and a pond in an open-air mall in Central America. On our days off, we’d hike the mountains. It’s been a never-ending journey of awesomeness.”

As he learned and his Knoxville company, Modern Design Aquascaping, grew, he posted content on his company’s YouTube channel; he finds that to be a big driver for opportunities for work. He also earned Artist of the Year accolades from Aquascape, which led to more referrals. He’s currently overseeing the construction of a massive recreation pond for a homeowner in Denver that he estimates will take two months to construct and cost about $1.5 million. Meanwhile, two of his three sons, Nicholas and Tristan, manage the work closer to home.

Like other artists, Adams can envision what he will create at any given job site. “I can feel it, I can see it in my head,” he says. “I’ve spent so much time outside looking at nature, and I’ve seen so many beautiful places, I can just envision what fits there. If I do a design on paper, it will never look exactly like the final outcome. It depends on the rocks we get and the way the hills dig out. You just have to let it happen.

“It’s all about a client and getting inside their head—what’s important to them. Once I know where their heart is, I can design anything for anyone. And they have to trust me to do it.”

Adams was preparing to tackle a project near and dear to his own heart—a backyard swimming pond at the home he and wife Stacy share in Friendsville for their kids and seven grandkids to enjoy. “We’re creating an oasis at our house, a spot where all of our family will want to be all of the time,” he says. “I’m super excited about that. It will be a really good opportunity to create video content for our YouTube channel. Swim ponds are all the rage these days. There will be frogs, there will be fish and turtles, and we’ll use natural biological filters to create a true habitat. I want to teach the kids you don’t have to kill your water and poison it with chlorine to swim.”

Adams shares his gospel of green habitats and his knowledge of construction on not only YouTube, but also his website, www.mdaquascaping.com, and on his job sites. “When we built a water feature for Shaquille O’Neal, we met a 14-year-old boy in the neighborhood and motivated him to start building a pond in his yard,” he says.“Now he’s working on one for his neighbors. He’s found a career path that’s rewarding.”

“We build people their favorite places,” Adams says. “That’s what we do. It’s where their kids will get married…” He pauses as he reins in his emotions. “We create the magical places where people spend time with the people they love.”