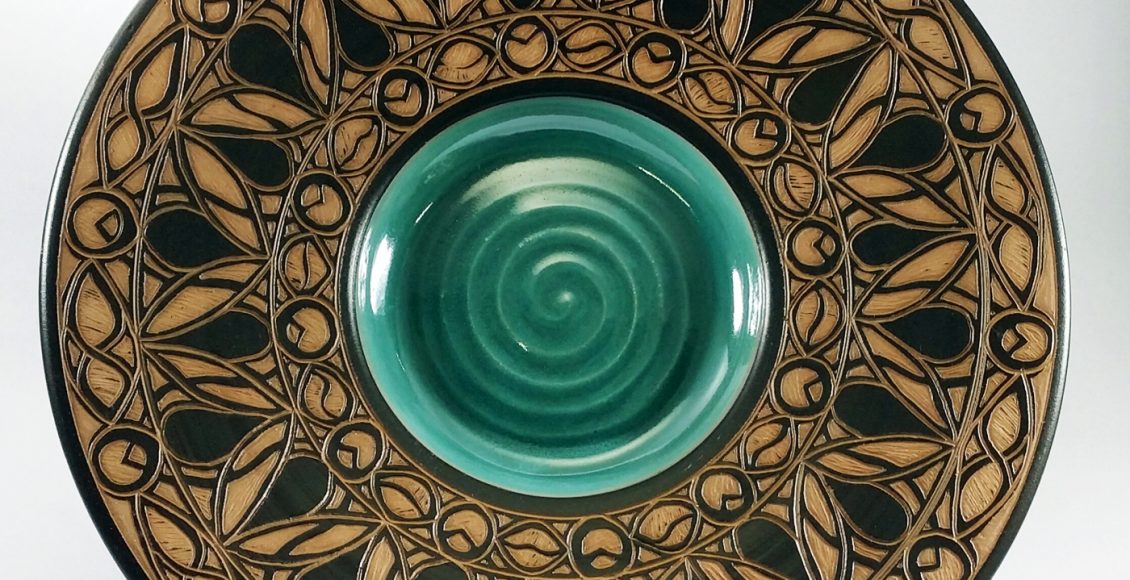 The potters whose work is featured on the following pages have one surprising thing in common: ceramics is something they stumbled into as an elective at school, and almost immediately they fell in love. “I was sunk, like that day,” one of them recalls. “I thought, yeah, this is going to be hard to not do.”

Now none can imagine a life that doesn’t involve messing with mud.

Beyond that, each potter has followed their own path and developed their unique style. A tiny ladybug distinguishes Ellie Kotsianas-Christner’s work. Ericka Ryba likes a neutral palette and clean farmhouse style. Michael Robison leans toward Celtic designs and carvings of leaves and trees.

These three potters offer just a sample of the range of styles available from Knoxville-area craftspeople. More can be found online at The Maker City’s website, themakercity.org, or that of the Foothills Craft Guild, foothillscraftguild.net. With any luck, many local potters will be found selling at local markets and craft fairs soon.

Before Ericka Ryba took up pottery and teaching—she’s the art teacher at Coulter Grove Intermediate School in Maryville—she completed culinary school and worked in food service.

“Out of that came a desire for a different lifestyle,” she says, referring to the long hours and weekend and holiday shifts that come with the territory. “I felt like the loneliest girl in America.”

So she went back to school for a master’s degree in fine art and fell in love with ceramics along the way. “It’s a challenge,” she says. “It keeps you humble. There’s always something to learn.”

About six years ago she started selling her pieces under the name Providence Road. “I had grown up on Providence Road in Maryville and I went to Providence, Rhode Island, for culinary school, and then there was the meaning of the word ‘providence’ that spoke to me,” she says. Her work is functional pottery with a muted color palette and an understated classic style. “I focus on surface design and texture.” She balances her time between pottery and her day job, taking her weekends and school breaks to stock Providence Road. “It’s a passion I enjoy, so it’s not hard to get in the studio.”

Ryba sells her work at Jacks of Knoxville and Whimsey and a Dream in Knoxville as well as at markets when they’re available. Her website is www.providenceroadpottery.com.

As with other local potters who fall in love with ceramics, it was an elective class that led Ellie Kotsianas-Christner to her career. She was majoring in advertising at East Tennessee State University when a ceramics class turned her head—and her career direction—to pottery. She has been a part of Knoxville’s Mighty Mud ceramics studio for about eight years, teaching classes, managing social media and creating her own work, which she calls Bug Pottery. Its signature is a tiny ladybug that she adds to nearly every piece.

“When I was a kid, my parents called me ladybug, then shortened it to bug, and that’s been my nickname,” she says. “I didn’t like the idea of using my name for my business, but calling it Bug Pottery is like using my name.”

Kotsianas-Christner creates two lines of work for Bug Pottery: a line of decorative vases inspired by nature and everyday functional ware—serving pieces, dinner sets, etc.—which customers can customize by selecting the glaze they want to see in their home. She sells from her website, www.bugpottery.com, at the gallery at Mighty Mud and, when able, at craft shows and markets.

“I love taking a lump of dirt and turning it into a fully functional form,” she says. “You go from something dirty and sticky to something tangible and pretty that you want to hold and use.”

Michael Robison’s path as a potter has woven and twisted much like the Celtic designs he carves into his work. But passion for the craft centered every move.

A Knoxville native, Robison set out to get an engineering degree when an elective class at East Tennessee State University led him to ceramics. “I was sunk, like that day,” he says. “I thought, yeah, this is going to be hard to not do.”

After ETSU, Robison apprenticed with a potter in Jonesborough and then taught classes and had a studio at William King Regional Art Center in Abingdon, Virginia. Later he taught at Virginia Intermont College in Bristol, while also supporting his family with odd jobs, including teaching pottery at a senior center in Kingsport. A job as a ceramics instructor in Boston, Massachusets, took him north, but he returned to East Tennessee and finally back to Knoxville.

He rented space for several years at Mighty Mud ceramics studio before building one of his own at his home. Since 2010 he’s sold at festivals and shows regionally and across the country. His website is www.michaelrobisonpottery.com.