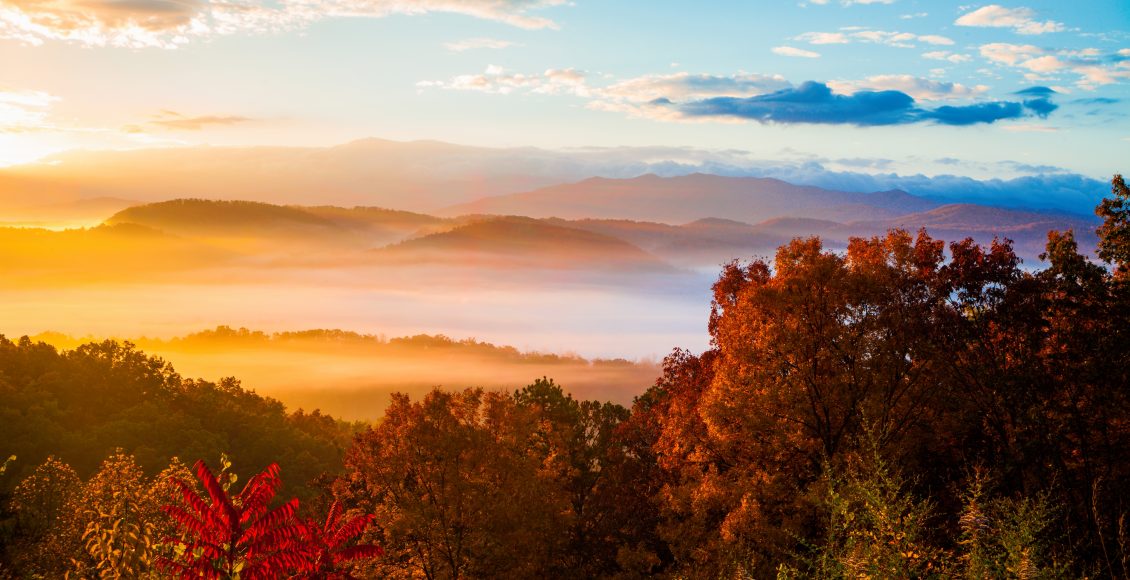 On mornings I drive into town, when the weather is as clear and crisp as it was this morning, I see the mountains. I’ve never tired of seeing them for I am a child of the mountains. My family’s long history of living and dying in this valley commands the respect for the Great Smoky Mountains. The history at my disposal tells me that my mother’s family emerged from Strawberry Plains but my father and his people were from and of the Appalachian Mountains.

As a child in the lap of my paternal grandparents, I was regaled with stories about their early life in the foothills of what is now the Great Smoky Mountains National Park. When the park was officially dedicated by President Franklin D. Roosevelt in 1940, my grandfather, James A. Pryor, was 50 years old, born in the Mint community of south Blount County. My grandmother, Laura Florence Baumgardner Pryor, was three years older, born in the nearby Carpenters section of south Blount County. Nannie was the third of nine Baumgardner children, all born near Carpenters Campground as was their father, James R. Baumgardner. If you don’t hear banjos and fiddles at this point you won’t get it.

“Papa” Pryor courted my grandmother all around south Blount County in a horse-drawn buggy. They frequented Montvale Springs, Tallassee, Cades Cove, and Abrams Creek. He told me many times about how Nannie won his heart with her “limber pickles and stack cake.” That’s the sort of thing grandfathers tell grandsons.

As a young man, Papa learned carpentry skills and worked on the Little Tennessee Valley Hydroelectric Development in construction of the original village of Alcoa. I wonder how many times he looked longingly up to the mountains during those hard days. The village name was later changed to Calderwood, and Papa would talk of working on the construction of the Calderwood Dam. Calderwood and Abrams Creek populated his stories and he was proud that he grew up and worked in the Smoky Mountains. He considered himself a mountain man. My grandmother loved to go back to the Baumgardner home place in Carpenters, and I remember her taking me to the one-room schoolhouse where she was educated. My family always attended Decoration Day at the Carpenters Campground Cemetery where Nannie’s family was buried and where she and Papa rest today. She would take me to the garden where she worked as a child. She would prepare a bucket of water and take me into the garden and we would sit on the ground and pull a turnip. She would wash it off with water from the bucket, slice it with a pocket knife and we would eat raw turnip to her delight, if not mine.

I spent a great deal of time as a child with my Nannie, spellbound as she told her stories of the mysteries of Rindy Bailey, a homeless East Tennessee wanderer who wore multilayers of clothing and carried her feather bed. Nannie would enhance stories reported by Knoxville journalist Bert Vincent about this woman who walked the hills and valleys of Jefferson, Union, and Sevier counties. She told me about the Walker sisters, five spinster sisters who lived as Nannie had in a primitive and self-sufficient manner in Little Greenbriar between Tuckaleechee Cove (now Townsend) and Gatlinburg. The Walker sisters refused to move from their home place and defied the federal government during the establishment of the Great Smoky Mountains National Park. Nannie told me about the sisters and how they lived, and I could tell that she envied their independence and lifestyle, something I think burns in all of us from time-to-time. Nannie had a real melancholy about early life for those few residents of what became the national park.

The medicine for her melancholy came in the form of a picnic trip into the Smoky Mountains. A picnic would be anticipated for weeks. Abrams Creek, Cades Cove, or Metcalf Bottoms, the lower end of Little Greenbrier, were always the destinations. Nannie insisted on leaving very early and cooking breakfast over an open fire. She would assign me responsibility for gathering sticks and fallen branches to serve as kindling, and she would cook country ham in an iron skillet and fry eggs and bacon over the open flame. She would sing old songs and dance about lost in the visions of her childhood. She knew every word of “The Ballad of Floyd Collins,” about a cave explorer who became the focus of a 1925 effort to rescue him from a Kentucky cave. So many things we do as grandparents reveal who we are and what we love in this world to those who are paying attention. It was easy to imagine her cooking over an open fire as a young girl with her brothers and sisters in the Smoky Mountains. She could eat like a horse but seemingly never gained a pound. If only I had inherited that metabolism. If she left a holiday table due to an interruption, we would refill her plate, and she would return and clean her plate again without ever noticing what we had done. As any good Pryor, Nannie always embellished a bit. She claimed to be part Cherokee Indian. I don’t know what part was Cherokee, but evidently it was not enough to get me a share of the tribe’s casino profits. Believe me, I tried.

On those trips my Papa would boast “Boy, today I’m going to ride a bear out of these hills – just watch me.” Luckily, the bears never showed up.

Any child of this valley had their initiation into the river. Nannie took me by the hand. The water was so cold it felt like my feet were freezing even in the heat of a summer day. I don’t know if you’ve ever noticed, but a mountain creek has a smell that’s unique and unforgettable. I don’t know what causes the scent, but it must be the combination of cold, fresh water mixed with the scents of moss-covered rocks and sweet rhododendron and mountain laurel blooms and musky hemlock and molding leaves. It is the scent of the mountains, and when combined with the fragrance of a campfire, one of the most unforgettable impressions of my childhood.

I have many memories of Gatlinburg and the Smokies from my young adult years before the candied apples, cheap souvenirs and miles of pancake houses moved in. I proposed marriage to my wife, Norma, at Howard’s Restaurant. I hid the engagement ring in a bag with my bowling ball in the trunk of my car, and when we got to the restaurant, I had trouble finding the ring box because it had fallen into one of my bowling shoes. I thought I was going to have to call the whole thing off. Months later, we spent our first honeymoon night in a small rock cabin at the Black Bear Inn in downtown Gatlinburg. I remember the most challenging part of that night was keeping the fire burning in the small fireplace. As I recall, everything else went well. A year or two later, we celebrated Norma’s return from a trip by cooking thick ribeye steaks on an hibachi on a late summer afternoon visit to Metcalf Bottoms Campground, my melancholy the one being controlled. That steak had as much as anything to do with the success of our 55-year marriage.

For many years, Norma and I spent New Year’s Eve with friends in rented cabins at Cobbly Nob. A roaring fire and a cabin full of close friends made for many a happy New Year’s. It was fun to walk the streets of Gatlinburg and buy taffy and, yes, candied apples. We always tried to end those New Year’s celebrations with breakfast at the Burning Bush.

I must admit there were a number of years that our Smoky Mountains held little interest for me. My occasional trips to the courthouse in Sevierville involved bumper-to-bumper traffic, and I dared not venture to Pigeon Forge and the national park. At one point, I considered purchasing a mountain home between Pigeon Forge and Gatlinburg, but lost all interest when the sales pitch included the details of a secret route to avoid traffic. No doubt, my problem with the Smokies concerns the way it has changed from the beautiful place of my youth to the over-commercialized, congested one of today. If I had not known it as it once was, perhaps I would have more tolerance for the hillbilly comedy clubs, upsidedown buildings and water parks. I can’t help but prefer things in their more natural state and appreciate things for “the way they were.” But those rivers are still there, and every now and then they call to me, as much as I might ignore them.

On a beautiful day last month, my wife, daughter, and our dog, Maggie, tried to escape the boredom of the pandemic by making a trip back to our beloved mountains. We entered through Townsend, which has changed very little over the last 30 years, and there was little traffic as we entered the national park. How beautiful it was as we traveled the route I had once traveled with Nannie and Papa. We stopped at a campground, and there it was once again — that fabulous smell of a campfire by a cold, clear creek. Though we didn’t leave early enough to do a bit of picnicking, I could see Nannie dancing and singing her mountain songs, and I vowed to return.