The Art of Armed Self-Defense 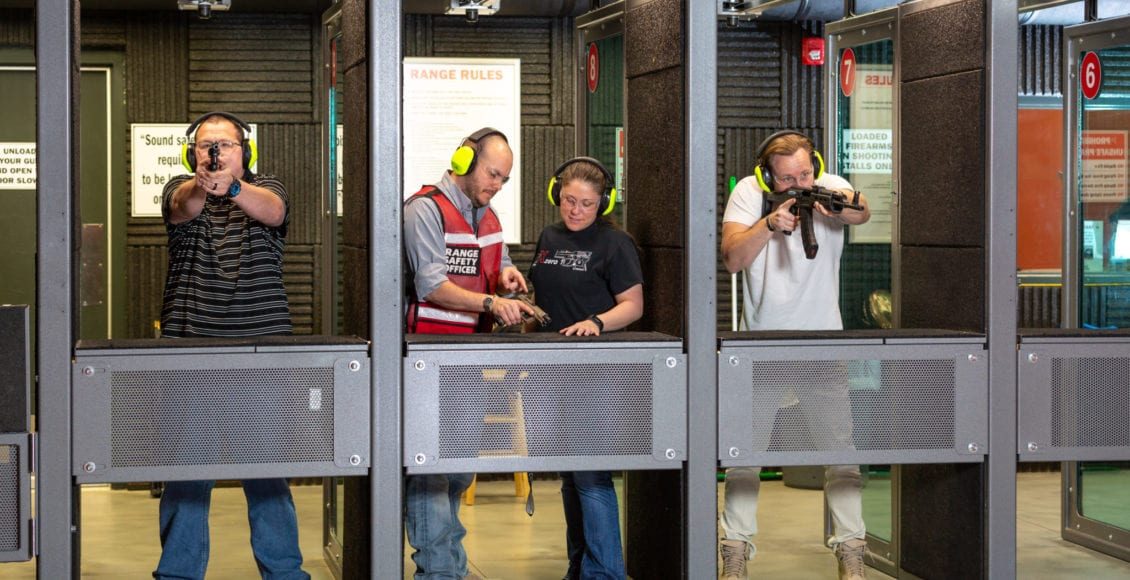 My friend Derek Magill had a very different introduction to firearms than most people. “My father runs glockstore.com, the world’s largest Glock handgun and parts manufacturer and distributor,” he says. “I grew up around guns—they were everywhere—with two supreme rules: ‘finger off the trigger’ and ‘never point

at anyone unless in self defense.’ Guns to me were just a part of life—a tool to protect yourself.”

Many people choose to carry a gun for self-defense. There are just under 600,000 people in Tennessee with permits to carry a concealed weapon. And this number does not count those who decide merely to keep a gun on their own property, whether in the home or the glovebox. Doing so doesn’t require a permit. The state issues permits to all qualified applicants, and once you’ve taken the required handgun safety course, you can even apply online. Whereas some states require gun buyers to get pre-purchase approval, Tennessee doesn’t. Basically, any sober person eighteen years or older can buy a gun.

And given the active hunting culture, many Tennesseans are introduced to guns at a young age. I once went clay shooting at Chilhowee Sportsman’s Club with coworkers, and I was impressed because some of them made it a family affair, bringing their pre-teen kids and teaching them gun safety.

Bryan Schroeder, owner of Safety First Training in Clinton, TN, can relate. He got his first gun, a .22 rifle, when he was twelve. “Thus began my lifelong affection for and collection of firearms.” He reminisces about a time it’s hard to imagine now: “Guns were not the hot button issue back then. I can even remember taking a twenty gauge shotgun to my elementary school with me. We would turn them over to the teacher, and she would return them after school. Then we would go squirrel hunting.” It seems less like a different decade than a different world.

Interestingly, Magill and Schroeder, both introduced to firearms at a young age, radiate not just enthusiasm, but a deep respect for them. Schroeder is a state-certified handgun safety instructor. If you’re going to carry a gun for self-defense, you’ll have to take an eight-hour class from someone like him before qualifying for the necessary permit.

Such classes teach people how to carry a firearm responsibly and intelligently. The basics are commonly known as the four rules of gun safety: (1) treat every gun as if it’s loaded, (2) never aim at something you don’t want to shoot, (3) keep your finger off the trigger until you intend to shoot, (4) be sure of your target before firing. Schroeder stresses, “You are responsible for every bullet you fire and its final resting place: not where you meant for it to go, but where it ends up.”

Permitted gun carriers are also responsible for knowing where the law allows them to carry and, more importantly, where it doesn’t. For instance, unlike during Schroeder’s childhood, it’s illegal to carry a weapon “in any public or private school building or bus.” This applies unless you’re discharging official civil or military duty or using the weapon for a school-sanctioned instructional or ceremonial purpose. This includes all campus grounds, and any property “in use by any board of education, school, college or university board of trustees, regents or directors for the administration of any public or private educational institution.” You may have a gun in your glove box while your vehicle is on school property, but you may not handle it.

Crucially, if you plan to carry for self-defense, you must know when brandishing or using a weapon is legally defensible. Tennessee law states that “A person shall not be charged with or convicted of a violation . . . if the person possessed, displayed or employed a handgun in justifiable self-defense or in justifiable defense of another during the commission of a crime in which that person or the other person defended was a victim.” Lawyers explain this as the “reasonable man standard”; only when any reasonable person in your shoes would fear for their life is it okay to brandish a firearm or employ force.

Perhaps the most difficult thing to prepare for is defending yourself or a loved one responsibly and intelligently under the extreme stress that accompanies situations in which you need to defend yourself with a gun. Magill recalls a time when he and a girlfriend parked somewhere to listen to music and talk, and another vehicle pulled up and blocked them in. “Multiple men got out of the car, and their clear intent was to rob us or hurt us in some way. I was able to let them know I was armed through the window of the car, and they fled.” He adds, “I meet so many people who go to lane style ranges and shoot at unidirectional targets who think they’re prepared for a self-defense scenario. Although it’s better than nothing, I don’t think most of them are prepared. Firearm defense is not just about hitting a target when you’re standing still. You need to be able to assess a situation for danger, command an attacker with your voice, put distance between yourself and your target, be capable of firing under intense stress, and understand the dynamics of how to actually take down a target, because it’s not always like the movies where the bad guy just falls down.” He suggests taking a class either with police or ex-military in an environment where you can engage targets at 360 degrees and at varying distances—some as close as two feet away.

If you want to be prepared to actually defend yourself, you need to shoot a lot. “Shoot until you’re tired and shoot some more,” says Magill. “You need to get reps in so you’re totally comfortable with loading, unloading, aiming, and shooting.” There are also classes designed to teach you how to do all of this under pressure. Glockstore, which will be opening a new location in Nashville soon, offers a two-day Advanced Self-Defense training. This involves being locked in a room with a gun. (In this case, a fake one). An instructor bangs on the door, screaming at you. “They are very good at stressing you out quickly to make you feel as close as possible to a live situation. They’ll then work with you on assessing and engaging that threat,” says Magill.

If you’re buying a gun for self-defense, pick the right tool for the job—something small and easy-to-conceal. Although a permit allows carrying openly, this puts you at a huge tactical disadvantage.

A .38 revolver is a small, easy-to-use handgun for new shooters, but, as Schroeder points out, “it really depends on how you plan on carrying it.” The circular cylinder of a revolver is not a big deal in a purse, but the flatter surface of a .380 may sit more comfortably in an ankle holster or belly strap. Ranges such as Knoxville Gun Range offer rentals, so you can—and should—try several guns before choosing one.

So should you go get one? Schroeder says, “I recognize that not everyone is comfortable with firearms, and that’s okay.” But, “sometimes the only way to stop a bad guy with a gun is for a good guy with a gun to intervene.” “The fact is, guns are a great equalizer in self-defense situations,” says Magill. “A 120 lb. woman with a gun can take on a 250 lb. man.” He adds, “So long as you’re up for the responsibility of learning how to use it safely, effectively, and if need be, lethally, then consider it. And be happy your right to do so is protected in America. A world without guns is one in which the biggest, meanest man with fists or a club can do anything he wants to most people. Police will never be able to respond quickly enough—and if they had the level of oversight necessary to do so, we’d have much bigger problems.”

Relax and Enjoy the Season