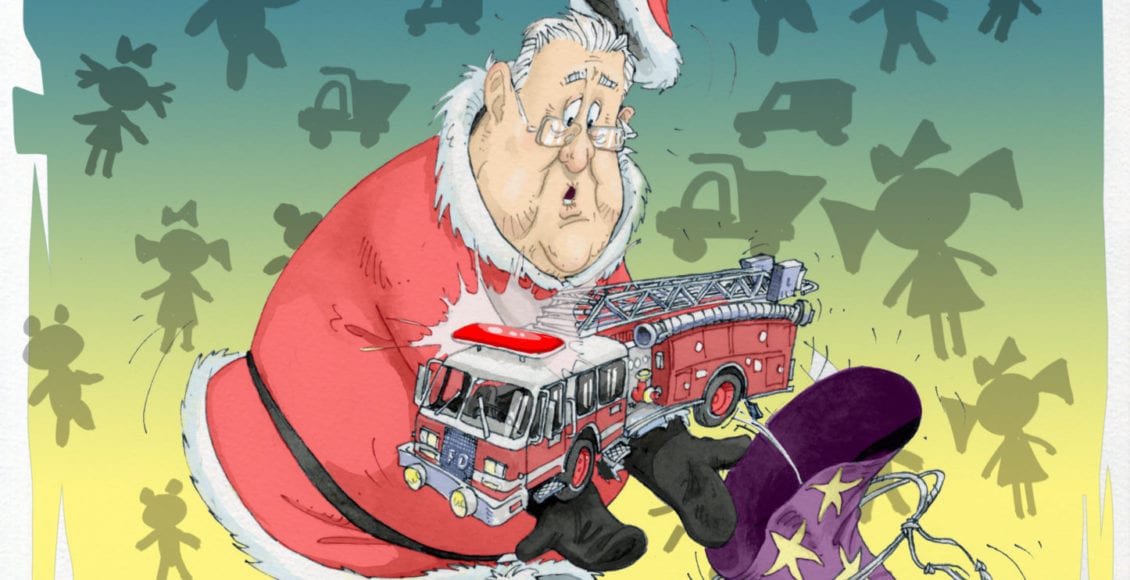 Don’t try to tell me there’s no Santa Claus.  I met him once years ago, when he actually came to my house and brought candy for me and my neighborhood friends.  Howard and David Dickens were there, and so were the Seals boys, Larry and Sidney.  Of course, Corky Goldman was the most excited.  Connie Woods was there, I’m sure.

There was a soft knock on the front door and suddenly he stepped inside.  WOW!  Of course, he was all in red with white trim and a wide black leather belt holding back his perfect rotundness.  I studied his well-worn but shiny black boots that must have supported him for more than a million miles.  But it was his hair that gave him an aura that seemed supernatural to a five-year-old.  Silver white and definitely real.  No wig, but real hair growing out from under his red fur-trimmed cap—and a magnificent, well-groomed beard.  He just stood in my living room with his hands on his hips, and it seemed that time stood still.

My small living room was filled with my playmates expecting a fake Santa, perhaps from Sears, but we were shocked by what was obviously the real deal.  Larry ran to him and wrapped himself around Santa’s leg while others just screamed or laughed that nervous laugh when you are overcome by excitement.  Darla from across the street wet her pants and the piano bench.

I must admit, I was quite the celebrity in Lincoln Park for years after the Christmas of 1948 because I had a direct connection to the real Santa Claus, and he was a personal friend of my father.  I never doubted him again until I was about eight, and Christmas morning turned into a scavenger hunt for gifts hidden throughout the house.

Almost everyone has fond childhood memories of Christmas mornings, and mine are especially memorable because my parents were so committed to the customs of the season and the happiness of me and my brother, Jimmy.  My father built an oversized ping-pong table that filled our living room wall to wall. He obviously forgot to measure a regulation table, and I knew that he was involved because it was made of standard plywood, had screw-on water pipes for legs, and was not painted green.  I had to crawl under the table to get to the fireplace to empty my stocking.  Traditionally, our stockings were always stuffed with an orange and lots of candy, along with things we needed anyway like pencils and a toothbrush.  A Tennessee football and jersey were once my major gifts from Santa.  That year, a Lionel train went to my brother, but I actually played with it more than he did.  I should have focused on the guitar Santa left me.  That guitar could have changed my life, and I might have died at age 42 in the bathroom of my mansion in Memphis.  But while I’ve always had the moves, I never had the voice.

As I got older, disaster began to creep into my holidays.  During my high school days, I was hired by Miller’s Department Store to provide the entertainment for the opening of the Christmas toy department.  The store manager knew me and thought I could put the show together from a recording and costumes the store had rented from a television show.  At that time the store was on Henley Street and was Knoxville’s major department store long before West Town or even I-40.  The big show was to feature four live cartoon characters in full body costumes that zipped up the back.  The costumes came with large oversized plastic heads. Of course, I was the star of the show, Huckleberry Hound, and my friend Bobby Baker was Quick Draw McGraw.  Benji Miller, as I recall, was Yogi Bear.  The group practiced dancing around and acting out the music, and on the Saturday morning of the performance the basement floor of the store was packed with hundreds of small children and their parents, excited about the show and the grand opening of the toy department.  And who was set to introduce Santa at the end of the show? Huckleberry Hound.

As you might imagine, if you hire four teenagers to take charge of your big store promotion, you must embrace the risk of disaster.  Well, guess what?  Benji got real nervous and had to use the restroom after we dressed in our costumes, but there was no restroom and seemingly there would be no rest.  We were confined in a hallway out of public view, and Benji fidgeted in his Yogi Bear costume as we prepared to go on the stage.  There was an emergency door that presumably led to the outside, but when Yogi Bear stepped outside for relief, it set off the fire alarm.  The children and their parents scattered believing there was a fire and the fire engines soon arrived.  Chaos prevailed.  Later, the show was presented to a smaller audience and, fortunately, we got paid and Christmas was saved for Huckleberry and Company.

Early in my law practice, I experienced another Christmas calamity.  As you may know, many lawsuits are settled just before Christmas and I had received a settlement check for a young married couple just days before the close of business for the holiday season.  The couple agreed, as is common, to accept a joint settlement even though the redheaded wife was the one physically injured.  There was no reason to require them to divide the joint recovery.  Just sweet and agreeable kids looking forward to a big Christmas with the fruits of her pain and suffering and his assumed loss of matrimonial prerogatives.  They insisted on a cash recovery and could not be talked into opening a joint checking account in which to deposit their loot.  I accompanied them to the bank just in case they encountered a problem with the settlement check.

Understandably, there was a delay while the teller gathered up $17,000 in cash, but when she stacked the money in the window, Red grabbed a fist full of hundreds. Hubby, not to be outdone, grabbed two fists full, knocking me out of the way.  Christmas cash flew into the air and all over the bank floor.  As they fought for the crumbs on the floor, I thought to myself, “Now, this is a learning experience.”  What I didn’t know about my clients was that they had decided to get a divorce pending the settlement and were then living separately.  It was a nightmare never to be repeated.

But even though Christmas has as at times been visited by calamity, it was always a happy time in my childhood—even more so later in my adulthood as Norma and I raised our own three children.  Using my mother’s recipes, Norma has always prepared a large roasted turkey, ham (HoneyBaked in recent years), mashed potatoes with giblet gravy, broccoli casserole, Roquefort cheese dressing, and the best minced oysters in the world.  If you have ever tried unsuccessfully to buy oysters from December 20 to 25, it’s because I’ve bought them all up.   This year our family looks forward to another happy Christmas, but, hopefully, without drama or disaster.

Merry Christmas everybody, and please leave me some oysters!