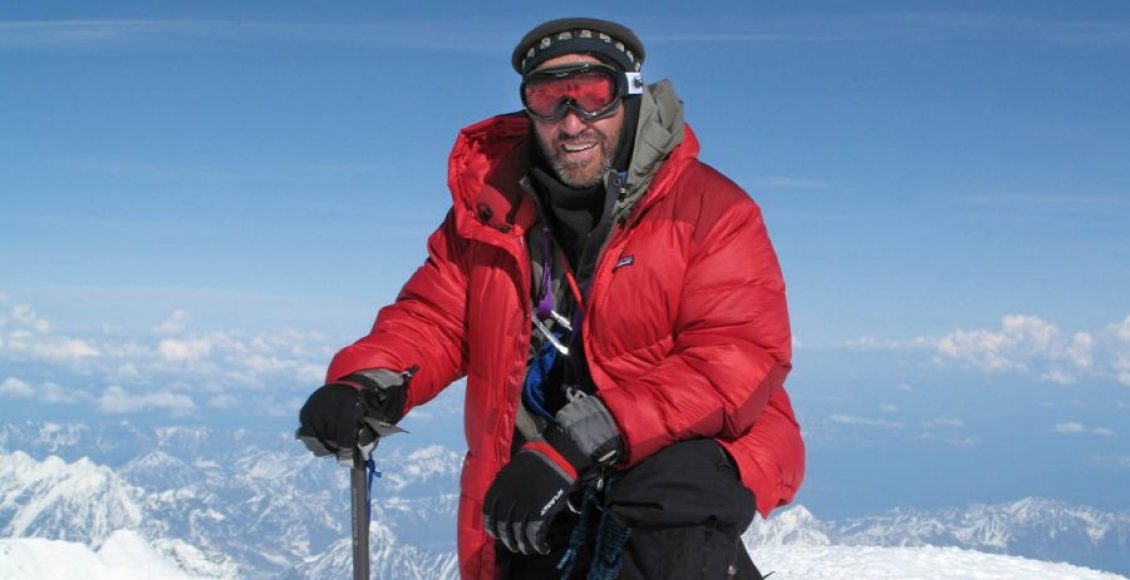 We stand at the foot of the Schoolhouse Gap Trail in the Great Smoky Mountains National Park, and I look to John Quillen and say, “Can you handle this or do I need to get the oxygen tank out of the truck?” His bemused look was one of, I’ve been to the top of Everest and this trail has the word Schoolhouse in it. I’ll be fine.

John Quillen is from Morristown. He is an adolescent drug counselor in Knoxville, an everyday guy, 54 years old, a typical ‘80s kid. He got in the same trouble we all did growing up, “playing Tarzan in the woods and getting poison ivy in unspeakable places,” he says. “Always that kid going out into the woods and not coming back at supper time.” His first drives as a 16-year-old were into the Smoky Mountains to car camp. John is unassuming, quiet, and soft spoken.

John has flirted with death and dismemberment while climbing three of the 14 8,000-meter peaks around the world. For the Americans in the audience, that’s 26,000 feet; your last airline flight was just a little bit higher than that. And these 8,000-meter peaks are in something called the “Death Zone,” elevations where there isn’t sufficient oxygen to sustain human life. Helicopters can’t fly there because the air is so thin. But John? John spent almost an hour atop Everest with only his Sherpa, when the average stay at the summit is just long enough to get your picture taken. He has almost lost body parts while climbing these 8,000-meter peaks because the oxygen is so low, the temperatures even lower.

“Being from Tennessee, we’ve all had the experience of walking in the woods on a cold, snowy day and having our fingers get cold at low elevation,” he says. “When you walk, it warms up [but] the higher you go, the more viscous the blood gets, which means less blood flow, which means you are killing the cells at the end of your fingers and toes. And for me, that was about seven or eight fingers and five or six toes”. When he returned from Everest, John spent 10 different days in a hyperbaric oxygen chamber at UT to save them.

I’m going to be honest. Everything I have watched and read about Mount Everest has been about tragic events and the dead bodies scattered across the landscape; it pervades my thoughts about extreme altitude mountain climbing. As a matter of fact, just days after my hike and interview with John, two Everest climbers died. I have always been curious as to why someone would be willing to put their life on the line for a hobby.

“When you step foot on any peak or climb any rock, it’s not about death; it’s just about the allure of the mountains and the call of the mountains,” John says. “For me, it’s just being in an outdoor space and the view.”

Long-distance runners achieve something called a runner’s high. Mountaineers like John describe the experience of sitting atop the world in a different way, equating it to something more profound: “They opened the velvet gate to heaven and I got to step in for a few minutes.” After hearing this sort of explanation, I think maybe I’ll consider it. Maybe.

Let’s get back to the frostbite thing. Mountaineers are often faced with this bizarre decision while on some of their expeditions. They arrive at a point of their ascent where they have to decide whether to continue up the mountain and return home with possibly fewer extremities, or turn around and head for the safety of base camp, extremities intact. John’s been there, and even in the short time we’ve spent talking, it’s pretty clear which choice he’s more apt to make.

“On Everest in 2018, I was at a decision point on my ascent where I knew my foot was already frostbitten, and this was with oxygen and with pretty good weather for Everest, only 20 below zero. That’s not bad,” he says. “But I had to kind of make that decision of [whether I was] going to push on knowing that my toe is going to be frostbitten again or turn around. [So I] pushed on.”

It takes a lot to get to the summit. Months of physical conditioning, in fact. But when a mountaineer arrives, it’s a time-stopping experience. And from the way John talks, it seems to be that way no matter how many mountains you’ve climbed.

“My ascent was so atypical in so many ways,” he says of Everest. “I spent 45 minutes on the Everest summit; no one ever does that. No one ever gets that opportunity. And my summit photos are me and my Sherpa, no one else was on the summit. Well, there’s a reason for that. It has to do with my age and how late I was getting to the summit. Everyone had summited two or three hours before I did. So I had the whole peak to myself for 45 minutes.”

It’s the classic tortoise and hare: “It pays to be the old man.” He tells me later: “When I saw the true summit, I thought there’s nothing that’s going to keep me from the summit. I can’t describe to you any kind of pain whatsoever until the descent.”

Right. The descent. The treacherous journey back down to safety, and one that is just as dangerous as the journey up. It’s the point where John says “all your senses kind of re-enter your body and you realize, okay, you better get it together because this is where it’s going to go bad, if it goes bad”.

John knows bad. He’s been a part of a disaster that almost took the life of a Sherpa, the Tibetan natives that are regarded as elite mountaineers and local geographical experts that guide climbers to the top of Everest.

“We were ascending the Lhotse face, which is the steepest 45-degree ice wall part, not the most dangerous, just the steepest part of Everest, and a rock came down and hit two Sherpa,” he says. Sherpa don’t wear helmets, he continues telling me. They wear a strap across their forehead to offset the “gigantic refrigerator-size loads” they carry up the mountain. Staring at the man’s skull, cracked wide open, John had no choice but to get involved. “I’m not a medical person. I’m not a blood and guts person. And sitting there, looking at somebody with their brains, literally, right there wasn’t my cup of tea, but we had to bandage him up.”

Later he tells me about his expedition in Pakistan, on Broad Peak in the Karakoram Mountain Range, another 8,000-meter peak. “It was a crap show from the very beginning,” he says, “…we were [rappelling] down from camp three to camp two and [my partner] missed a clip and fell a hundred feet.” John couldn’t see what truly happened until he got down to his friend, whose leg was a mangled mess. “We were two days from base camp. We were on vertical slopes. It was getting late in the day, and I was going into panic mode because I just did not know what to do with him. There was no-one there by this time…nobody around.”

“I had to splint his leg and then I had to put him in a sleeping pad and lower him hand by hand for hours on a fixed rope while I was clipped in, without me coming off the fixed rope,” he says. He finally got to a point where he could call for help, on one of the most vertical points, and a team came and helped him get his friend to base camp. “I was real worried. We didn’t get him out of there for five days, but he survived it. But three of my teammates did not.”

John’s teammates, mountaineers who had helped get John’s friend to safety, went a different route on their ascents and got lost. “While we were getting home, I’m getting news about my three teammates getting lost on the mountain.” John says there was no word from the trio for days. “Eventually we lost all contact with them and they were never heard from again. It was the biggest attempted rescue on Broad Peak…You asked me earlier if I ever thought I’d give it up? I definitely took the next year out.”

The legendary mountaineer George Mallory is famously quoted as replying to the question, “Why did you want to climb Mount Everest?” with a winking, “Because it’s there.” Over the last few decades, Everest has become what some refer to as a “commercial climb”, as anyone with $50,000 can jump in the conga line and head up with a guide. But what some don’t realize about climbing high peaks is that taking your selfie at the summit of some of the highest points on Earth might also include daring rescues and the possibility of leaving some of your crew behind to die on the mountain. It’s a risk not easily taken, but one understood by mountaineers, like John.

Throughout the interview, I become more focused on the physical price you pay to climb to a point on Earth where flora and fauna don’t exist. Laid back John Quillen will always guide the conversation back to the positive aspects of why he climbs Denali, Rainier and other peaks I’ve never heard of and need him to spell when he says them.

“The freedom of being on a remote peak…it’s thinking you’re one of the few people to ever set foot on a certain piece of ground,” he says. “I mean there’s something to that, that gets into our pioneer spirit.”

When John’s head isn’t literally in the clouds, he spends a lot of time hiking and protecting the Great Smoky Mountains, working with and battling against the Park Service for your rights to access all parts of the park for free.

“I go to the Himalayas, I paid $11,000 to climb Mount Everest. I don’t mind that; I don’t live there. I’d like to see that go back into the local economy,” he says. “But I don’t feel like we need to make mountains so [financially] prohibitive, especially here, where it’s going to price the single mom out of taking her kids into the backcountry having to pay $24 a night to sleep on the ground. This park needs to be open.”

If you want to walk all 800-plus miles of the trails in the park, John can help. “I’m on the support crew for trail finishers. People are trying to get their ‘Maps’, which means they are trying to finish them all. I’ll sherpa their stuff into campsites because you need refreshments after a long hike. Plus, it’s a good workout hauling stuff uphill.”

John Quillen can often be found climbing the Crag at Ijams Nature Center, and he’s a story teller.

Look for the quiet guy.

Ask him about Mount Everest and have a seat.