The Return of Metro Government 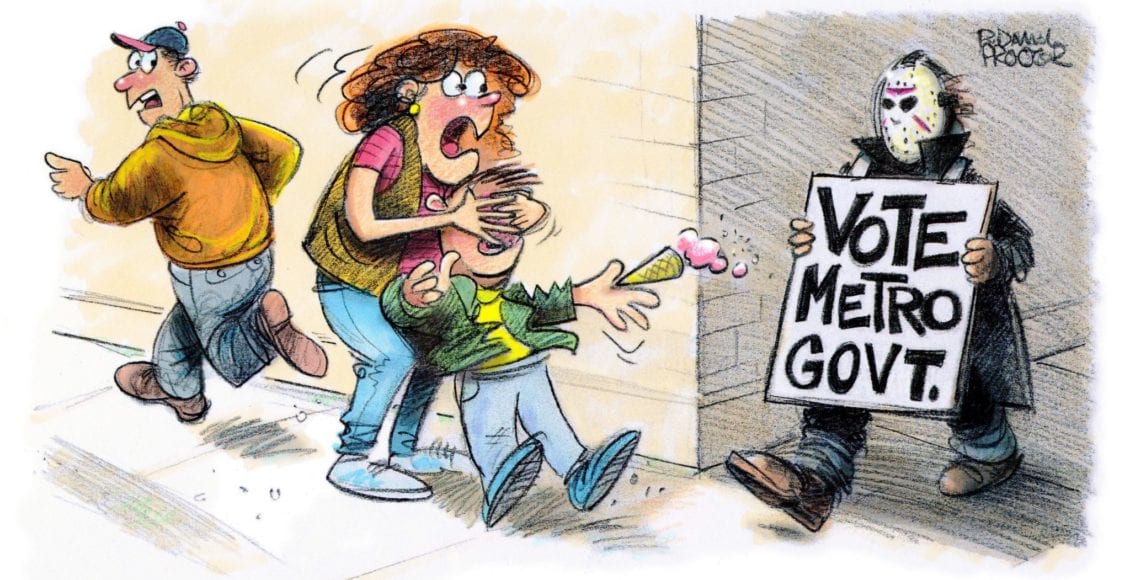 Rising from the Dead?

The idea of metro, or unified, government is akin to the character of Jason in the Friday the 13th movies: regardless of how many times or in what exotic ways he’s killed off, it just won’t die.

In 1959, 1978, 1983, and 1996, voters went to the polls to decide on Knoxville/Knox County metro government; and each time it went down in the flames of voter-disapproval. The calendar alone suggests that a future push for metro, consolidated, or unified government (pick your description) is as inevitable for Knoxville and Knox County as it is for Jason Voorhees to again trod the earth seeking victims.

Here’s why: it seems rational. A single government seeing to the needs of all county residents. No more duplication of services. A streamlined government. Lower costs and taxes. Governmental nirvana.

How could it lose? Because voters don’t believe the pitch, have their own reasons for living where they live, and reject the idea that a larger, more expansive government somehow transforms into a more responsive, economical government.

For years, local pols bowed toward metro government in campaigns, speeches, interviews, debates, and other forums. To happen sometime. In the future. It pleased many in the business community and the news media, but it was going nowhere.

That doesn’t mean there won’t at some point be a real or de-facto unified government, but if so, it will be because of financial pressures on the city rather than voters embracing the concept.

There have always been excuses given for its failure. The city’s separate school system was typically cited as an impediment, but that was dealt with in the July 1, 1987 merger of city and county schools into one structure.

The 1996 campaign was dominated by two issues: who would be the top law enforcement officer, the county sheriff or city police chief; and if it really would be more cost-efficient to have one government? The outcome? Down. In. Flames.

There are differences between local government and the following entities, but it’s not unlike saying that citizens would receive better service if counties were eliminated and all governmental responsibilities were handed off to a bigger, yet more streamlined, state government.

The fact is that metro government just doesn’t sell well. Its most recent Tennessee failure occurred in Nov. 2018, when an effort to combine the Clarksville and Montgomery County governments lost by daunting margins, as the Clarksville Leaf-Chronicle explained after Election Day, “An overwhelming 87.9 percent of voters in unincorporated Montgomery County voted against it, with just 12.1 percent for it.

“In the Clarksville city limits, the margin was closer, but it was still failed at 58.8 percent against, 41.2 percent in favor.”

Among the reasons it will not happen in Knoxville and Knox County:

If there is a constituency elected officials can be sure will vote, it’s government employees, their families, and possibly their friends. Fighting for “streamlining” that could cost paychecks, authority, perks, or power, is not typically a support motivator. They’ll work tirelessly to kill it.

Questions about city or county residents being responsible for costs, debt, and other financial factors incurred by each government.

As mentioned, a majority of voters don’t believe the “bigger government is better government” line.

Over the long term, the city’s financial situation could induce some form of unified government. The city is a finite geographical entity. It has significant debt issues. It’s not annexing. There’s only so far that the city can in coming years raise taxes to meet its needs and obligations.

Apart from that, the push for metro government will inevitably make a comeback in any case, because there are inevitably adherents who are convinced it’s more efficient, avoids duplication, etc., etc., etc. And it will be killed, as surely as Jason Voorhees in the next Friday the 13th movie sequel.

A Fresh (Not Fake) Take

The Power of Positivity