Is this hot topic a political non-issue or campaign gold? 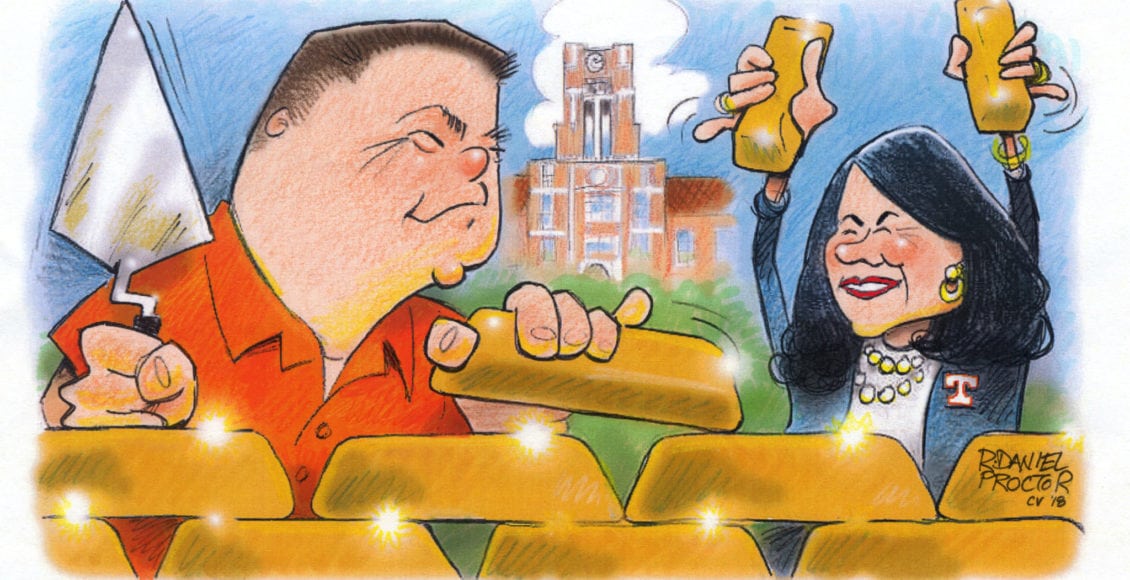 Voters are motivated by many things, but among them two principal factors drive people to the polls: anger over something someone has done or fear of something someone might do. That’s why a political candidate running against the University of Tennessee, which typically wouldn’t seem a smart strategy, could work. There are, in fact, millions of reasons.

UT’s bill is between $19 million and $20 million for buyouts and payouts to fired former coaches and university administrators. It’s the stuff that voter anger is made of. UT is a venerable institution, justifiably respected, if not revered, by Tennesseans because so many have graduated from the institution, support its athletics, understand its importance to Tennessee’s future, or have sent their children to the school.

This is particularly true if people can be convinced that money to which they can be connected is being wasted. “Wasted” can quite comfortably be used to describe millions spent to send coaches and administrators packing.

An example of how candidates could make this an issue: The candidate defines the problem in terms personal to the voter; The candidate compares dollars flowing to fired UT officials to average voters’ difficulties in making ends meet; The candidate pledges to bring whatever pressure is necessary to ensure the practice is ended, whether or not it’s possible for them to do a thing about it.

There are multiple variations of how this can be presented to the electorate. It’s useful, and usable, as a campaign tactic. Here, for example, is one version of a 60-second radio ad:

The University of Tennessee is a jewel by which our state is known around the world; however, the jewel needs cleaning. Our state’s flagship university is paying millions of dollars to people for being fired from their jobs. For failing! Millions of dollars paid out to football coaches and administrators, people let go by the university for not getting their jobs done.

UT’s former chancellor is getting paid 440,000 dollars a year – more than 35,000 dollars a month – to teach classes. That’s more a month than many Tennesseans make in a year. Some of that is your tax money, and it’s happening while you’re working hard to pay your bills, take care of yourself or your families, and to save for the future.

Hi, I’m Sincere Candidate, and if you elect me I’ll put a stop to your money being used to pay people at UT to go away. You don’t want millions of your hard-earned dollars paid out to fired UT officials. They’re getting millions, and you’re paying the price. Send me to Nashville and let me put a stop to it!

Voila, instant issue! Whatever is said to defend the practice will sound like excuses: it’s not all tax money; UT is contractually obligated; buyouts are common; the legislature doesn’t make those decisions, etc.

But, as the saying goes, when you’re explaining, you’re losing. And good luck convincing many Tennessee voters that its elected representatives should be on the outside looking in concerning these well-publicized, big-dollar, debacles.

Knox County State Rep. Martin Daniel, who represents the 18th House district, took on UT over such issues as the public train-wreck surrounding the Office of Diversity and Inclusion; a proposed code of conduct; and a review of discrimination lawsuit settlements. Daniel, a Republican, was targeted in the 2016 primary for his criticism of UT by his opponent, former State Rep. Steve Hall. Daniel still has his state representative job.

Running against UT is the wrong thing to do; running against UT in specific areas that are easily understandable as wasteful or unnecessary is another matter altogether. It can even be couched, if preferred, in positive terms: “I ask for your vote so I can go to Nashville and help the University of Tennessee to stop getting into positions where it’s paying people millions of dollars to go away.”

If voters can be made angry enough about UT firings payouts or fearful of UT payouts in the future, it just might be an issue on which a candidate can cash in.