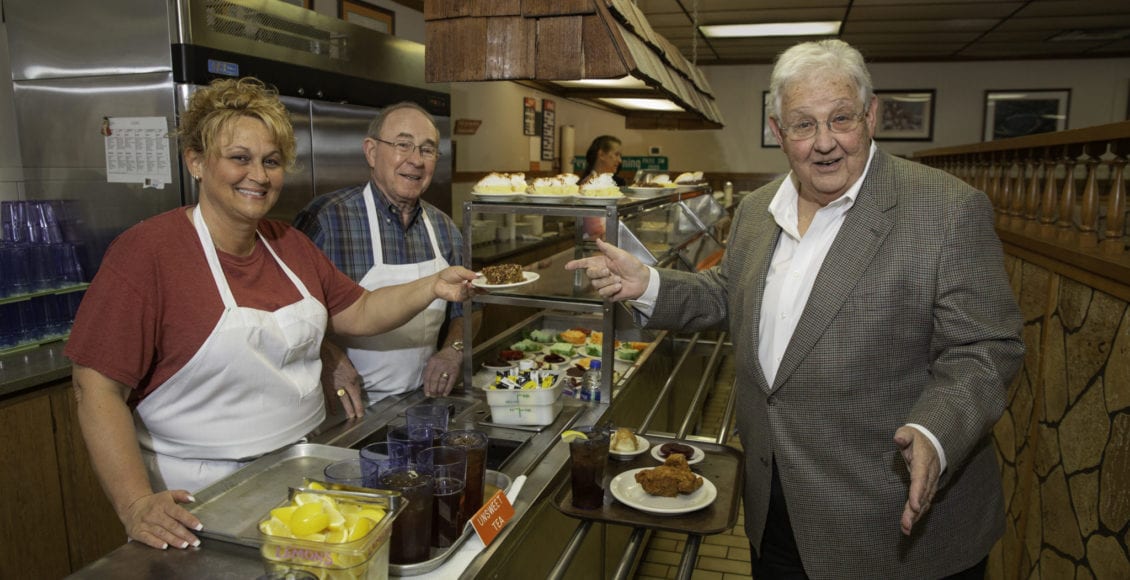 Last year, I was referred to a new doctor in the Dowell Springs medical complex off Middlebrook Pike. I have now been forced to tell that doctor I can no longer come for my appointments because I have gained 15 pounds under his care. He was offended and asked how such a thing could happen, and I confessed he was located too close to Wright’s Cafeteria and I ate lunch there before and after each appointment.

If you like good down-home country cooking, there is no place better than Wright’s. It’s become a Knoxville institution, but most do not know the story behind those good pinto beans and chicken and dumplings. David and Donna Wright are responsible for the popularity of this homegrown treasure, but it has taken the hard work of three generations to make it a reality.

It all started in 1928 when Grandpa Harry Bean opened a small grocery store on Cumberland Avenue at Seventeenth Street. That grocery store eventually moved to the present site of the cafeteria on N. Middlebrook Pike, and it was operated as a grocery and feed store by grandpa alone until his son-in-law, J.B. Wright was discharged from the military in 1945. J.B. and his wife Ella Mae, David’s parents, eventually took over the operation of the grocery store. In 1955 the store was enlarged to its present size. Throughout the 1950’s, Wright’s Grocery and Feed Store was a busy place. They not only sold groceries, but also livestock feed, ran three rolling stores, put in gas pumps, and J.B. operated the best butcher shop in Knox County. To further diversify, J.B. and Ella Mae began to serve breakfast to workers who came in the early morning, and pickle loaf, bologna, and souse meat sandwiches were prepared to order at the meat counter at lunch time. J.B. sold groceries on credit and accepted eggs, cured hams, and hogs in payment. Wright’s Grocery would deliver grocery orders in a green Willis Jeep and loaded grocery orders in fruit baskets for pick up long before Kroger and other major grocers discovered this concept.

In the mid 1960’s, Middlebrook Pike underwent a redesign, and highway construction interrupted the grocery business. J.B. and Ella Mae noticed that although grocery sales were down their food service was uninterrupted. It was at that time they decided to get into the restaurant business instead.

The grocery store was remodeled and turned into a cafeteria in 1965. Ella Mae prepared the menu using her own recipes that she had developed from what she had learned from her mother, Grandma Bean. Stuffed peppers and spaghetti were early favorites. David likes to say that the family spaghetti recipe “came over on the mother ship.” Chicken and dumplings, steak and gravy, fried chicken, and fresh vegetables were the mainstays. Menu items were refined over time, and J.B. added catfish strips to serve on Fridays. Both J.B. and Ella Mae were good cooks, and they began to develop a reputation for serving good country cooking.

In 1974, David and his wife Donna were asked to take over the operation of the cafeteria by David’s mother and father, and Donna reluctantly left her career in nursing to join Ella Mae in the kitchen. In time, Donna added her own touch to the menu items, and today their daughter, Robin Griffin, oversees the food preparation while her daddy, David, entertains the customers in the serving line. Robin grew up in the business, and loyal customers hope that she will perpetuate the cafeteria operation for many years to come.

Now, if you’ve never been to Wright’s Cafeteria, you need to know that it is one of the few places where you can regularly find fried chicken livers. The menu regularly features fried chicken (the best in Knoxville), turkey and dressing, meatloaf, and fried catfish on Friday. The fried chicken is cooked with David’s “own secret recipe.” David says his fried chicken is nothing more than the “losers from Newport’s Friday night cock fights.” He also swears that he “gets up early every Friday morning and fishes for the catfish with dynamite.” The vegetables are as fresh as the season will allow, and the mashed potatoes are the real deal: peeled, cooked, and whipped in the kitchen. Wright’s uses close to 400 pounds of potatoes a week and takes no shortcuts. Pinto and navy dried beans are soaked overnight and cooked with ham hocks and flavored with a touch of bacon grease.

Wright’s is famous for its gravy. During the course of the week, Robin prepares her mother Donna’s sawmill gravy to serve over chicken bits, steak, and pork. A recent survey has revealed that David says the word “gravy” more than any other person in the United States. Ripley’s Believe It or Not can’t find anyone who closely challenges him. You can hear him ask, “Do you want gravy on those taters?” when you enter the front door.

Wright’s Cafeteria is open every Thursday night for dinner. It takes a lot of work to run a restaurant of any type, and five lunches and one dinner a week is all David and Donna can squeeze out of their long-time loyal staff. Donna Burnette, the cashier, is also the pie maker. Every morning she and Robin bake nine to twelve pies and a ton of banana pudding for the day. David’s brother, Calvin, works in the kitchen with Robin, and you can tell that all of the employees have a close relationship with the Wright family.

When you eat lunch or Thursday night dinner at Wright’s Cafeteria, you usually get more than good food. It is a gathering place where friends like to meet and the famous and the infamous can be found. Politicians of all stripes dine at Wright’s. They know it’s the place to see and be seen. One day, I even saw a table of Knoxville’s four democrats talking low over plates of fried chicken. Lawyers, judges, doctors, policemen, and sports celebrities are regular customers. Several U. T. coaches are regulars at Wright’s, and Gus Manning has been a long-time favorite customer. In the fall David predicts every week’s final U. T. football score, but don’t bet his numbers because he has never picked the Vols to lose.

My wife and I ate dinner last Thursday night at Wright’s, and before we left there were four couple friends of ours who had gone through the line and sat down at our table. Friends we had not seen in months all happen to show up on the same night to dine on the food we grew up on. Now, understand, Wright’s draws a rather “mature” crowd. It’s not a teenage hangout.

Wright’s is so popular, S&S Cafeteria put a billboard on the property next door to try to solicit away customers. Many customers fill takeout boxes for relatives and sick friends who crave comfort food. Of course, David is the master of ceremonies and knows virtually every customer and their kin folks. You may remember, several years ago David ran for the state legislature and lost in the primary. He found out he was well liked, but nobody wanted him to go to Nashville to pass bills–they wanted to keep him cooking meals on Middlebrook Pike. He chats with everyone coming through the line, and on Fridays talks a lot about hush puppies. “How many pups do you want with that catfish–how about tartar?” David is kind of the unofficial town crier and passes good and bad news to his friends coming through the line. He’s a walking obituary and up on all of the latest local and sports news. He swaps jokes with many customers, so if you’re waiting in line you just have to be patient and appreciate the unique, friendly nature of the experience.

I, like many of our readers, was raised on country cooking. There’s just something comforting and reassuring to me about basic southern meals cooked using time-tested traditional methods. Call it country or call it soul food, it takes me back to my youth and stirs memories of home.

The family tradition of Wright’s Cafeteria goes back 90 years. David Wright’s grandfather, Harry Bean, started the ball rolling, and now David and Donna’s daughter, Robin, carries the family banner dedicated to good southern recipes and a great place to meet with friends to enjoy a pleasant piece of Knoxville history.

A Step Back in Time