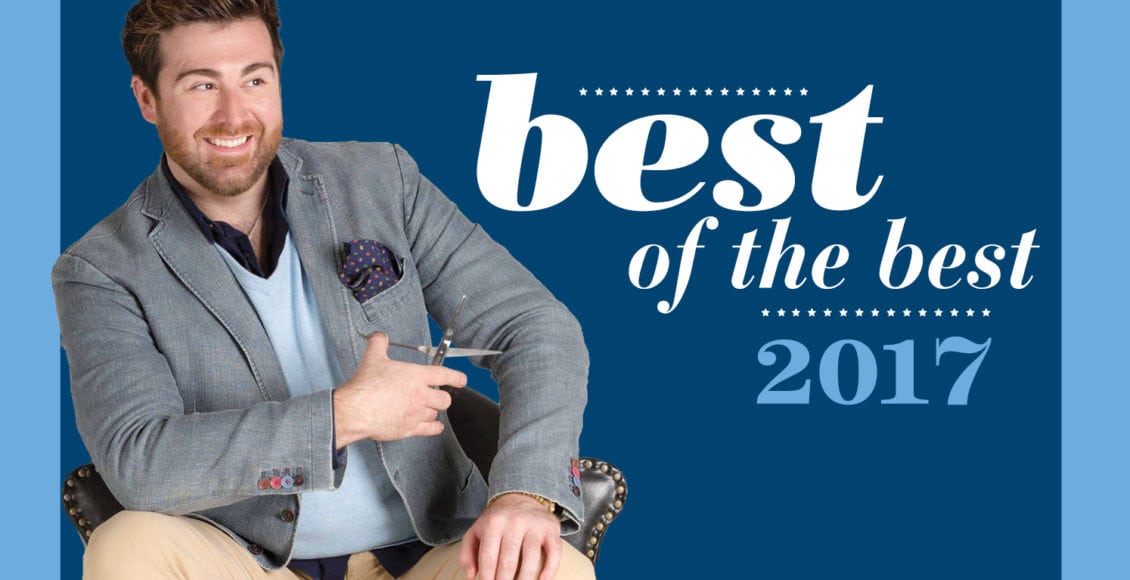 Each year, as we get more and more interest in Best of the Best, and as more businesses vie for top position, new winners emerge. This year saw an explosion in both number of votes and changes in first place. In 61 categories, voters crowned a new champion, an amazing turn of events.

Additionally, with the advent of electronic voting, coupled with voters required to vote in a minimum number of categories, we have virtually eliminated ballot box stuffing.

We want to give our readers a true Best of the Best. With the number of votes and efforts to eliminate over-voting, we’re proud of our results and our winners.

Archer knew his calling from an early age: “I remember going to the beauty parlor with my grandma and my mom when I was younger,” he says, “and we would sit in the corner with a glass-bottled Coke from the machine, and these old women would come in looking haggard and awful, and you could tell that they were there to make themselves feel pretty, and when they left they looked and felt like a whole different person.” That’s when Archer established an aesthetic that would govern his personal and professional life: “It is so cool to have the ability to like touch people on that level.” Then he decided to do just that.

Archer’s journey to establish Grow started in the most inauspicious of ways: by being fired from his first salon job. After graduating from cosmetology school in 2008, he worked at Ross the Boss, who recruited him fresh out of school. He notes that he was in a way excited when they terminated him. “I know that sounds strange,” Archer says, “but I knew that is not where I wanted to be long term.”

As Shane tells it, at the end of a busy Saturday at the Turkey Creek location, he was asked to “talk” with Ross Badget, Jr. (the son of the eponymous salon’s founder) and with the salon coordinator. He assumed that he might be promoted to have his own station at the salon, having been a “floater” up to that point. Instead, “He sat me down, and he was like, ‘there’s been some things and stuff going on, and you’ve been voted off the island’.” Archer then assumed he was being moved to another store. But no; he was being terminated, told that he didn’t mesh well with others and that his lifestyle had “a little bit to do with it.”

When Shane had his exit interview with the founder he asked him, “Did you fire me for being gay?” Archer recalls that Ross said, “I don’t have to answer that. Tennessee is a right to work state. I could fire you for wearing a purple shirt if I wanted to.” Archer has never forgotten that, and for every interview he did at every salon after, he wore a purple shirt.

When he moved on to Hairpeace, he told the owner Ethan Brewer that “My goal is to one day do my own thing. I told him my story and that I felt really strongly about owning my own salon. And he kind of joked and said, ‘Well maybe I’ll sell you this one one day’.”

Archer praises Brewer for helping him develop his artistry. “He allowed me to do a lot of things like become a educator for a product company instead of being there every single day.” And so Shane developed skills in another area of the industry. He continues to be a national educator for a product line he uses at Grow—he has chosen it because “of its eco-stance and general awesomeness.” He travels around the country on the weekends to teach classes in other salons.

“Ethan gave me the opportunity to train under him and some very successful hair stylists,” Archer continues. “He gave me a launching pad—kind of like a springboard—to get me where I am. I’m grateful for that.”

When Archer was ready to open his own place, he just went for it. He has some definite opinions on and insights into the salon industry. “I decided to do my own thing, he says, “because I witnessed things in other salons that I liked and didn’t like.” He chose to make it a place where stylists love to work—“at the end of the day we’re artists,” Shane says, “and if you don’t like what you do it’s going to come out in your work, and your work will suffer, your clientele will suffer, and without them you have nothing.” He envisioned a workplace that felt inclusive instead of exclusive.

“A lot of salons build, or try to build, loyalty to their brand instead of to their stylists,” Shane notes, “so if the stylist ever leaves, then the salon still keeps the clients—keeps the money. Whereas I am of a different philosophy. I am very upfront with my stylists. The whole point is to empower them to be the best that they can be.” Archer says that he can’t stand when an owner attempts to build loyalty to the salon instead of the stylist.  “They’re not your clients. They’re the stylist’s clients,” he asserts.

He designed Grow to make every single person, both worker and client, part of the conversation. He wanted a place that felt like home, wanted it to be a place that was warm and inviting. Exemplary of this are the coffee bar in the waiting area and a color bar where, “instead of sitting in front of a mirror gazing at yourself looking like a crazy person with foils hanging everywhere and color on your eyebrows, you can sit and work on your laptop or eat lunch or talk to someone across the table.” He relies on the word “community” to describe Grow. Indeed, one of his favorite stories is about how two women who were neighbors didn’t meet until they were together in the salon. Now, they’re friends. And most of what you see in the salon supports community as well: the candles, the music, the art, the jewelry, and the coffee are all local.

Naming the salon was an important process. While he wanted to keep his name out of it and craft something simple, positive, and uplifting, multiple professionals told him that he should have his name in it as well. They compromised.

And so his creation became Grow: A Shane Archer Concept. While he wanted it to be a happy name that evoked an emotion, he also wanted people to think about what the name meant to them. And he wanted to grow his staff, their and the salon’s clientele, and the community. As Archer says, “we just want Grow to keep growing. I just want to do everything different than any other salon is doing.” Apparently, the name is serving him well.

There are similar success stories throughout this year. We hope you enjoy our presentation of Knoxville’s Best of the Best.

Correction: In the hair stylist category of both our print and online magazine, we initially and inadvertently located Frank Gambuzza in the incorrect salon.