A lifetime of laughter on the links. 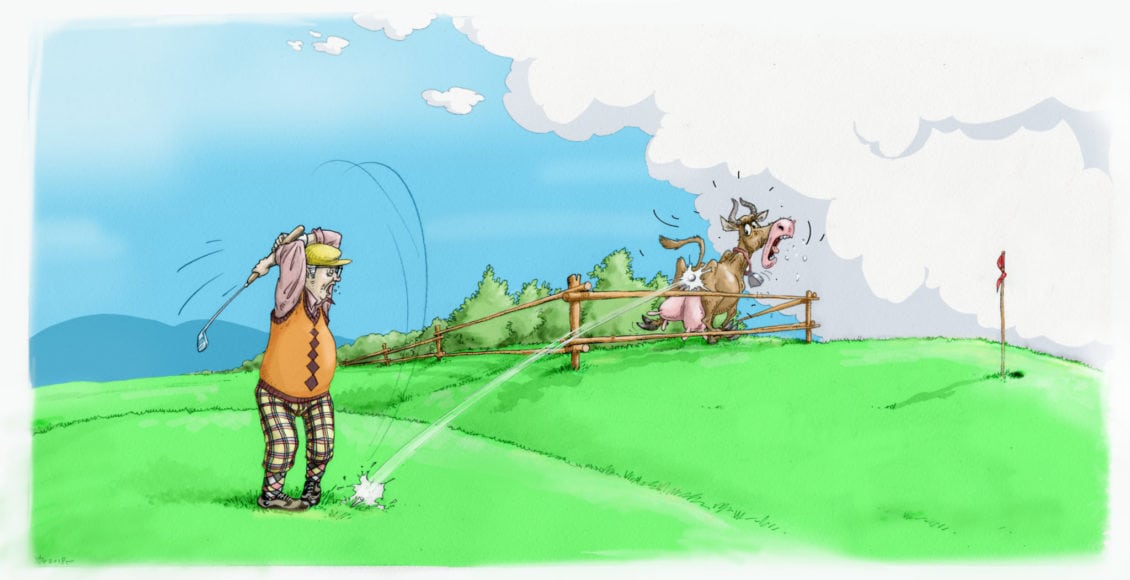 I just made my annual purchase of Golf and Golf Digest magazines. Every spring, I buy golfing magazines to look at the latest golf clubs and equipment. This is the time of year to dream about the great golfer I should have been.

The thought of new golf clubs is exciting to every golfer, even though there is very little or no difference between new clubs and the ones I have been using for several years. As a kid I used to play at Whittle Springs Golf Course. I would knock the ball all over the place with some old wooden shaft clubs I found in the basement of my childhood home. In fact, I’ve done the same thing throughout my life—just knock the ball around trying to find something that works. I’ve never had a lesson, and believe me, you can tell. When my sons were old enough to show a genuine interest in the game, I sent them to Golf Digest’s school to learn how to play the game correctly from experienced teachers. That’s a luxury I never had.

Now, just because I am writing an article about golf, you shouldn’t get the idea that I’m a good golfer because I’m not. For many years, my handicap has been about 18, which means that I get a free stroke on every hole. I’ve played with some really good golfers over the years, and by using my handicap I’ve been able to be somewhat competitive. I admit that I gamble on golf games, and I’ve won some but mainly lost a lot of money over the years. When I lose, my policy is to pay cash immediately when the round is over, and in that way I can assure myself that my conspirators will play with me again. In fact, on occasion they have picked me up for a game or sent a taxi cab or limousine.

I’ve never been able to understand how professional golfers can walk up and hit the ball so confidently in front of thousands of people. When I play golf, I do not want anyone watching. I once played in a golf tournament at Holston Hills Country Club, and they gave a nice prize to the person who hit the ball closest to the hole from a distance of about 160 yards. I qualified for the shootout, along with six others, and the thing was staged on the 9th hole with hundreds of people sitting on the bank behind the green to cheer us on. I had never been so nervous in my life trying to hit the ball expertly in front of so many experienced golfers. We got three chances and my first shot was shanked off to the right toward the hot dog stand. You can imagine the laughter and the jokes when my ball hit the tin roof of the turn shack and made a loud thunder-like sound. I managed to hit a third shot fairly close to the hole and almost won the prize. That was probably the high mark of my golfing career.

In fact, I’ve hit a lot of unintended things with my golf ball over the years. Once, in Maryville, I was trying to take a shortcut across the corner of a cow pasture and hit a cow in the butt. I’ve hit a bird, a tractor, a glass window, a grist mill, and lots of lakes, ponds, and trees. I hold what is surely a world’s record by hitting all three playing partners in my foursome—with one shot.

My wife, Norma, plays very little golf, but several years ago she made a hole-in-one while we vacationed in Florida with another couple. Our friends arranged a round on a prestigious course, and on a par 3 hole she hit a blind shot to a hidden green. Norma was shocked when she found her ball in the hole, and she now has a trophy from the course that certifies that she made the hole-in-one. I got nothing but the bill for the greens fees. I’ve never made a hole-in-one, and I’ve played a hundred times more golf than Norma. From time to time, she reminds me of her golfing superiority.

The greatest thing about golf is it’s not tennis. Tennis would be an awful sport to play because you have to walk and run a lot, and every court looks the same. The exciting thing about golf is traveling around to different beautiful courses. There is nothing more fun than a good golf trip with your closest friends. In October 1995, my regular golfing crew of about 20 decided to spend four days in Florida, playing golf and eating fish. Unfortunately, two days before the trip, Hurricane Opal struck the Florida Panhandle, causing massive damage to everything, including the golf courses we intended to play. I quickly changed the trip by secretly altering our airline tickets to Little Rock, Arkansas, which was one of the few places in the southeast that was not experiencing massive rain and floods caused by the hurricane. When we flew out the next day, no one knew our final destination. I arranged for rental cars and hotel accommodations at the Arlington Hotel in Hot Springs. I thought the spa and hot baths might help me to play 36 holes a day. The best golf course in Hot Springs was a very exclusive private course not available to the public. Just the kind of course I thought we deserved. When I called the golf pro at the course, he informed me that it would be impossible for us to play since we were not members. Finally, knowing Bill Clinton (then our president) was from Hot Springs, I asked the club pro if President Clinton had ever played his course. He confirmed that the president had played the course, and I asked if he was a member. Finding that he was not a member, I asked whether, if he called for tee times, would the president be allowed to play? “Of course,” said the pro. Whereupon I advised that the president was out of the country and would not be able to play golf that weekend and asked if we could have his tee times. The pro laughed and finally relented, and we actually played the course twice and had a great time.

That trip to Hot Springs resulted in an annual “Mystery Trip” where only the planner knew our golfing destination. We went by bus and by air and traveled to many mystery destinations. Golf at its best.

As a teenager, I regularly slipped onto the Deane Hill Country Club course, trying to learn how to play. To avoid being caught and charged with trespassing, I would only play the six holes on the north side of the ridge; those holes became my specialty. I would take two or three clubs and try to complete those holes without getting caught and thrown off the property. What little skill I have I honed on those six holes, and as an adult I played Deane Hill several times but never felt comfortable on the other twelve holes.

I have played golf with some great guys over the years, and we’ve shared some memorable experiences. Once, a friend was lining up a putt on an elevated green in Hilton Head and as he squatted and scooted back to better visualize the contour of the green he fell off backwards and down 15 feet into a deep sand trap. A woman walking her dog nearby saw the calamity and turned away to keep from laughing. Although embarrassed, my friend made the putt.

On another occasion, my friend Johnny Comer hit his tee shot, which he felt hit a tree and kicked down into the fairway. There was a dog nearby and when they stopped their carts to hit their second shots his ball was nowhere to be found. Finally, his ball was located about five feet out of bounds and he claimed that the dog had picked his ball up and carried it out of bounds and that he was entitled to drop it back where he observed it fall in the fairway. His opponents disputed his ruling and vehemently disputed the dog story. Finally, to prove his point, Johnny picked up his ball and showed his opponents how it was wet and smelled like dog breath. He lost the argument and had to go back to the tee and hit another shot.

One of my long-time golfing friends fancies himself kind of a “nature boy” and regularly wanders off on an adventure and forgets to focus on his golf game. Once, he returned from the woods being chased by an alligator. Do you have any idea how fast an alligator can run?

I’ve always thought it would be nice to be a hero and perhaps save somebody’s life. In one golf match I finally got my chance. My friend, Ed Dulin, hit his tee shot just inches from a scummy pond. The area looked snaky to me as Ed removed his shoes and socks and rolled up his pants to try to position himself in the pond to hit the ball. I remarked that he should look out for water moccasins. Suddenly, he screamed and jumped out of the water claiming that he had been bitten by a snake. Although I saw no snake, I could believe it and quickly dropped to the ground to suck the poison out of his toe. As his toe neared by mouth, he hollered, “Wait, wait, I might have just stepped on a stick.” So much for sucking out poison and becoming a hero—Ed decided to just pick up and go on to the next hole.

Those are a few of my recollections from a lifetime of fun playing golf. Now, if you don’t mind, I’m going back to my golf magazines to try to find a new driver.