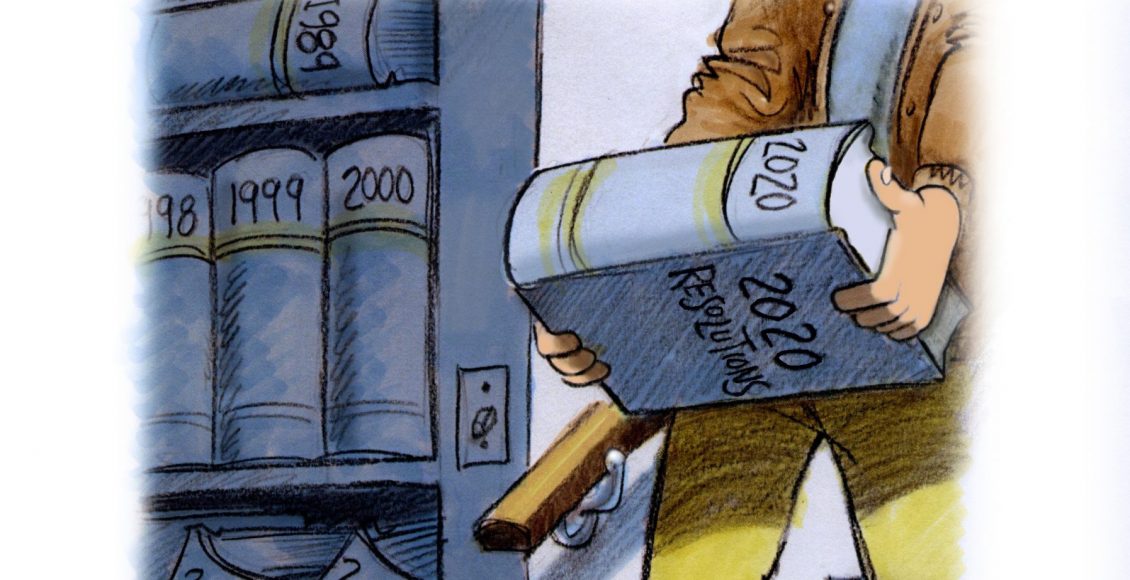 Curious minds want to know.
What are your New Year’s Resolutions?

In general, the Knoxonomist approves of New Year’s Resolutions. His study of humanity, mainly from a barstool at his local watering hole, has led him to the regrettable conclusion that most folks could stand considerable improvement. The Knoxonomist is not like most folks. When well-lubricated by the nectar of PBR, he finds himself a finely-honed being—an inspiration, not a work in progress.

Mrs. K does not agree and recommends he rethink his assertion.

Every year she composes New Year’s Resolutions for the Knoxonomist, a task she accomplishes with great relish and industry. These books are so impressive, he is sure that she must begin work on the project in the summer. It is typeset and bound, containing hundreds of resolutions, conveniently divided into chapters. It always has a thoughtful title: one year’s was “Striving to be Your Personal Best”; another’s was “You Can Do It: Tips for Being a Better Person”; the most annoying was “Becoming the Husband Your Wife Wants.”

Exhaustively indexed and cross-referenced, they contain case studies of the Knoxonomist’s wrong-doings followed by a multiple-choice quiz to ensure the Knoxonomist derived the correct lesson. In some cases there is extra space to write a detailed paragraph explaining what he should have done or said instead.

The Knoxonomist promises to give the tome the consideration it deserves and then hides it; last year he carefully buried it under loose insulation in the attic. Somehow, the tome would appear, open, next to the Knoxonomist’s computer with a passage highlighted, “I resolve to empty the cat box instead of just dumping in more cat litter” (Chapter 3: Household Chores), or “I resolve to trim my eyebrows on a weekly basis” (Chapter 27: Personal Grooming), or “I resolve not to ask panhandlers for change after offering them a dollar” (Chapter 42: Interpersonal Relations).

One year, the Knoxonomist decided to create a list of resolutions for Mrs. K., but after a quick risk-benefit analysis, he burned the list in his office wastebasket which incinerated a buried half-empty bag of Doritos. Nacho cheese-flavored smoke filled the room. The Knoxonomist managed to drown the flaming mess in the bathtub, and then spent the next few hours franticly deodorizing the house before Mrs. K got home.

However, the next day the Knoxonomist discovered that year’s tome sitting open-faced next to his computer. Highlighted in yellow: “I resolve to not eat bean burritos” (Chapter 68: Common Sense).

But enough digression. Kathy, you asked about the Knoxonomist’s New Year’s Resolutions. He has none.